Staying at B & B Villa Amelia does not just mean sea because we are facing the beach. A stay with us can also be a starting point to discover the many beauties of Tuscany within a day trip. There suggest a few:

Do not let the noise of others’ opinions drown out your own inner voice.
Steve Jobs

Routes between monuments, traditions and culture

The discovery of a rich artistic heritage. Here’s where to go and what to see: monuments, works of incomparable beauty and treasures

Pisa, known throughout the world for its tower, an extraordinary monument that enhances the tetralogy of Piazza del Duomo, boasts a millenary history which sees its greatest splendor at the time of the Maritime Republics. It is a treasure trove of artistic treasures whose Romanesque and Gothic churches, squares and buildings enhance the districts drawn by the Arno river and the ancient streets. Important university has maintained a record to date thanks to the many faculty and the Scuola Normale Superiore located in the Piazza dei Cavalieri. Visitors to Pisa discover not only art, culture and history, but natural environments where the park Migliarino – San Rossore, the Coast and the Monte Pisano, build a stage of particular fascination.

“Ideal City” of the Italian Renaissance, Livorno reveals its history in the districts crossed by canals and surrounded by fortified walls, in the tangle of streets that embroider the neighborhood of Venice, the port Medici, dominated by towers and fortresses, which is wedged in the city center. Designed by the architect Bernardo Buontalenti at the end of the sixteenth century, Livorno see, at the end of the seventeenth century, a strong urban expansion.
The Old Fortress, imposing complex built to protect the harbor, alongside the New Fortress, the walls, the perimeter of the canals, navigable by boat that draws the city. The Venice district retains the original architectural and urban characteristics: a dense network of canals which once linked the port to the warehouses, foundations, water, roads, alleys, palaces.
Livorno lively, open grown in 700 and 800 turns instead in neoclassical buildings, tree-lined parks in the city center which hosts major museums and cultural institutions in the Art Nouveau style villas overlooking the sea, the impressive market provisions. The city has a history and cosmopolitan soul. Crossroads of the world, from its origins to the home of distant and different communities that have settled here, retains traces of each of these communities: churches, synagogues, gardens.
Livorno is a land of artists and musicians: Amedeo Modigliani, Giovanni Fattori and the Macchiaioli school, Pietro Mascagni were born here, marking, with their works, the artistic world.
Important cultural institutions such as the Museum Giovanni Fattori painting exhibitions are places of permanent and temporary exhibitions of international prestige. The Museum collects memorabilia Mascagnano, testimony, documents the life and works of the great composer and his works are repeated in the opera season every year is organized by Theatre Tradition of Livorno.
A feature collection of votive offerings, mostly marine character, is Montenero, Livorno hills, attached to the shrine dedicated to Our Lady of Graces, the patron saint of Tuscany and destination of a continuous pilgrimage.

Located at the foot of the Apennines, has a pleasant tourist mix of history, art, folklore, monuments, naturalism, gastronomy. Among the well-known centers of Tuscany, Pistoia shows elements of the original characterization and well worth a visit.

Lawn from the Middle Ages Vanguard offers a historical-artistic prestige. In the historical center the Emperor’s Castle, the only evidence of Swabian architecture in central and northern Europe, the Duomo, the Praetorian Palace, the Basilica of St. Mary of Carceti, the churches of St. Francis and St. Dominic valuable works of great masters such as Agnolo Gaddi, Paolo Uccello, Filippo and Filippino Lippi, Donatello and other famous artists of the fourteenth century and the Renaissance.

The Museum of Mural Art, the Museum of the work of the Duomo and the Galleria degli Alberti show collections that reach the artistic season of the nineteenth century. The Museum of Fabric swatches are visible from the fifth century until today. The east with modern buildings, and the Center for Art Conpemporanea “Luigi Pecci” offers an important view of the Van. 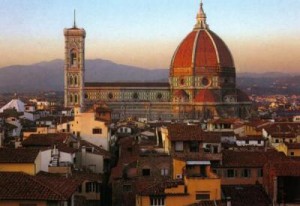 Florence keeps an exceptional artistic heritage, splendid testimony to its secular civilization. Lived in Florence Cimabue and Giotto, the fathers of Italian painting, Arnolfo and Andrea Pisano, renovators of architecture and sculpture, Brunelleschi, Donatello and Masaccio, the Renaissance, Della Robbia and Ghiberti, Filippo Lippi and Angelico, Botticelli and Paolo Bird, and universal genius of Leonardo and Michelangelo.
Their works – with those of many other generations of artists up to the masters of our century – are collected in the city’s many museums the Uffizi, the most selected gallery in the world, the Palatina gallery with the paintings of the “Golden Ages “, the Bargello with the sculptures of the Renaissance, the museum of San Marco with Fra Angelico’s works, the Academy, the Medici Chapels and the Casa Buonarroti, with the sculptures of Michelangelo, the Museum Bardini, Horne, Stibbert, Romano, Corsini, The Gallery of Modern Art, the Museum Opera del Duomo, the Silver, Stones.
Great monuments are the landmarks of Florentine artistic culture: the Baptistry with its mosaics, the Cathedral with its sculptures, the medieval churches with bands of frescoes, the public and private palaces – Palazzo Vecchio, Palazzo Pitti, Palazzo Medici-Riccardi, Davanzati Palace, monasteries and cloisters, convents and circles, the Certosa. The Etruscan civilization in the Archaeological Museum comprehensive documentation.

Siena, ie, the quality of life made city. The first town of Europe ‘s to close its center to traffic in 1966. Siena, international place of culture, boasting a university … younger than 750 years and is home to prestigious institutions such as the ‘Chigi Music Academy, the University for Foreigners, the Accademia dei Fisiocritici and Intronati.

A city where every stone has remained unchanged over the centuries, where one breathes an ‘atmosphere that you can not find anywhere else, because its people have kept alive the traditions of the fathers, such as those related to the festival of the Palio, renewing them every year with undiminished force and enthusiasm.

Bright hill town in eastern Tuscany, Arezzo boasts ancient origins. Was a major lucumonie Etruscan and then Roman city of strategic importance. It was a center of thriving economic activity, and many valuable monuments among which we mention the Amphitheatre with its substantial remains. Famous were its foundries and factories artistic vases red paint (called coral vases) whose technique spread throughout the Roman world.
In the Middle Ages Arezzo was a free commune which often prevailed in the interests of the Ghibelline party, in opposition to the nearby Florence. After the defeat of Campaldino (1289), his fortune was compromised and, despite some recovery in the Tarlati eventually succumb and it became a dominion of Florence (1384). As such, he joined with the rest of Tuscany, the Medici Grand Duchy.
Arezzo is set on a hill at the edge of the plain formed by the floods of the Arno. At its peak emerge the Cathedral, the town hall and the Medici Fortress, from which branch out like a fan, and down to the gates ubiche, the main roads. The highest part of the city retains a strong medieval aspect which still stand fine architectural examples rear. The part of the city that juts out into the plain has a modern and lively.

In the lattice of the modern city draws the historical center, closed hex green bastions Francesco I did renew (1574).

The survivors of Roselle, formerly Etruscan, after the devastation of the Saracen 935, were repaired here in plain dell’Ombrone a dozen miles from the sea. The fortune of the place followed the alternate predominance of reclamation and malaria, won in our century. Siena had steadily the city from 1336, which surrendered only to the Medici in 1559, after Montalcino. The market and the capital of Tuscany, fervently farm.
To visit the Cathedral at the end of ‘200, the Archaeological Museum and art, the walls and the Church of San Francesco, near the Natural Park of Maremma and the Etruscan ruins of Roselle.