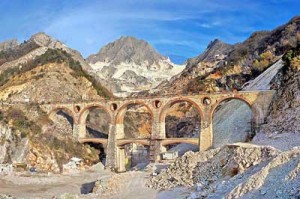 Strange thing this travel, once you start, it’s hard to stop. It’s like being alcoholics. Gore Vidal, The City and the Pillar, 1948
For people who have a taste for solitude, being in a place where no one can position yourself exactly is a rare joy, perhaps all there is also the pleasure of travel. Cesarina Vighy, The Last Summer, 2009

Carrara is only 20 km away from the B & B Villa Amelia and can be reached by car, train or coach.

Carrara: journey in the capital of marble – Do not miss the Malaspina Castle and the park of the Apuan Alps

Carrara marble is the capital of the world, as well as the capital of the Apuan-Versilian stone industrial district, is located on the Ligurian Sea, in the north-western Tuscany. Its origins are linked to its precious marble, known around the world as early as Roman times, and today talk to evoke Carrara marble and its quarries, so precious to be called “white gold”, well known to attract artists of every age and from every place.

Strange thing this travel, once you start, it’s hard to stop. It’s like being alcoholics.
Gore Vidal, The City and the Pillar, 1948

For people who have a taste for solitude, being in a place where no one can position yourself exactly is a rare joy, perhaps all there is also the pleasure of travel.
Cesarina Vighy, The Last Summer, 2009

The original city of Carrara consisted of the Parish of St. Andrea (XII), now the Cathedral, in the thirteenth century by a defense wall which encompassed the castle and the town hall. The coat of arms of the municipality of Carrara is the wheel, as well as one of the interpretations of the name derives from the origin of the name “Cararia” place of the wagons, wagons on which they were transported blocks of marble. The coat of arms appears on the facades of ancient and prestigious buildings, not least the Duomo, the wheel is associated with the motto: FORTITUDO MEA IN ROTA (my strength is in the wheel).

In 1557, Alberico I Cybo Malaspina enlarged and changed the city’s image, the new walls enclosed within it the suburbs outside the medieval walls, and Caffaggio Grazzano, and within the new plant was laid Alberica beautiful square. In the nineteenth century the city will suffer a new territorial expansion, due to economic and population growth determined by the development of the stone industry. The nineteenth century saw the construction of a port for shipping after a dock connected first to the train station and then to the Avenza Marble Railway leading to the quarries.

The ancient castle of Carrara has represented the city gained independence from the power of the Bishops of Luni. In fact, in the thirteenth century secular forces towns were strengthening the military organization of the village, strengthening the fortress. As a result, successive transformations have changed the defensive tool in a beautiful mansion, flanked by the Prince’s palace erected by Alberico Cybo-Malaspina (XVI c.). This building became, in 1805, the Academy of Fine Arts Academy building has, on the Square, the front lines prevailing in the seventeenth century, with sets of large windows and an important portal marked with multiple input marble.

Built in 1982 on the initiative of the Municipality of Carrara collects and documents the culture of marble. It is divided into six sections, internal and an external area that, through an interdisciplinary approach, offering the visitor a complex and fascinating local heritage, “Roman Archaeology and history of the area” with valuable historical artifacts found in the quarry, the richest “hall of marbles” of Italy, “Industrial Archaeology” with machinery and tools for the extraction and processing of marble from Roman times to the present; “Technical Applications” with examples of the art design, the “casts” and plaster reproductions of marble icons for the restoration I replaced and “Modern Sculpture” with valuable works in marble, bronze, wood and other materials.

The Apuan Alps are unique to their geomorphology and natural: the chain stretches for about 60 km along the coast of the Tyrrhenian Sea in the areas of Versilia, Lunigiana and Garfagnana, and is known for the beauty of its marble and the depths, the great cavities of the karst underworld and the different nature of the rocks that determines the presence of varied and contrasting environments.

Not to miss the park, amongst other things: the medieval village of Casola in Lunigiana and the Museum of the Territory of Valle Aulella; Equi Terme (Fivizzano) with caves and spas, the Canyon of the Furrow of Equi, the village and Vinca valley, the village of Colonnata in Carrara, the marble basin and the quarry museum Fantiscritti.