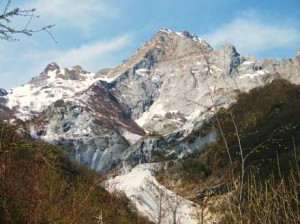 The Apuan Alps are one of the most typical and original mountainous areas of the Italian peninsula, the richness of the environments and landscapes that guards. The ancient presence of man and his activities has left traces of very thick and has disseminated the territory of important historical and cultural. The Apuan Alps are known throughout the world for the beauty of its marble and other decorative stones and construction (chives, breccias, Cardoso stone). The Apuan Alps are therefore a complex topography of great beauty with the immensity of the mountain range, from the harsh morphology, with its deep valleys and slopes steeply inclined. In the stretch of a few kilometers, from short coastal plain of Versilia, the Apuan Alps rise to nearly two thousand meters above sea level with M. Pisanino (m 1947).

Only those who risk going too far, will be able to see how far you can go.
Thomas Stearns Eliot

Noteworthy are in this mountain range aspects of geomorphological significance. There are several examples, well-preserved moraines, erratic boulders, valleys and cirques last Würm glaciation. Are also present karst surface, as fields carreggiati, dolines (Carcaraia, M. Altissimo, M. Sagro, etc..) And other phenomena of dissolution epigeal (plateau of Vetricia; arc of M. Forato, etc..). In the basement then, meet some of the finest examples of karst. We find here because the deep abysses and the Apuan large cavities, which are the result of an impressive labyrinth of tunnels and shafts: the Antro del Corchia – for example – with over 70 km of underground ducts and development of 1210 meters in altitude, is the largest karst system in Italy and one of the largest in the world.

In the heart of Tuscany there is a “blank Mountain” ….
Nestled between the mountains of Upper Versilia in the Park of the Apuan Alps and close to the villages of Levigliani and Terrinca (in the municipality of Stazzema), Mount Corchia (1678 m), stands in the southern sector of the Apuan Alps along the main watershed of the same mountain chain: it is a massive carbonate by steep sides, with grassy slopes at the top, carved cirques and other forms of the last glaciation, on whose sides there are numerous caves, such as the Tana dei Gracchi The Tana Omo Wild at Foce di Mosceta, the Buca del Cane, and the famous Cavern of Corchia
5 million of geological history behind it, the Antro del Corchia is the largest karst system Italian 60 km of tunnels and shafts, maximum altitude of 1200 meters, making it the third deepest cave in Italy. Are just a few numbers Antro del Corchia, the largest Italian karst system and one of the largest in Europe, which since August 2001 can be visited by tourists due to the realization of a completely equipped and illuminated with an almost horizontal trend winds along a mile into the bowels of the earth, open all year.

Another important geomorphological phenomenon is what has given rise to so-called “Potholes”, hemispherical cavity, sometimes perfectly smooth inside limestone. They can be found in some of the channels that go down into Turrite Secca (M. Sumbra) in M. Tambura and at the Valley of Hotels (M. Disagree). Their formation is due to the slow abrasion by siliceous pebbles at whirlpools. Some are exceptionally large even as the Alps are found.

Interesting and very spectacular is the window of M. Drilled. The magnificent arch that marks can be seen from many miles away from both the sea and the Garfagnana. Its origin is probably due to interference between karst surface and groundwater, surface erosion and weathering action.

The old mining gave an impression peculiar to the environment causing cuts and fractures of the relief to the higher altitudes, covering cascades of debris (the “quarry”) and opening several fronts typical ways of competing (and now abandoned in street renaturation). There was thus, on the whole, a unique mining landscape that contains deep reasons of interest. The highest concentration of marble quarries takes place in the mountains near the town of Carrara. Other municipalities in which they are cultivated agricultural marble of mass, Seravezza, Stazzema, Screeners Below, Minucciano, Casola in Lunigiana, Fivizzano. The richness of the Apuan Alps geomineralogica includes metalliferous veins abundant in iron, lead, silver, copper and other metals (the presence of which has given rise to mines, today, on the other, inactive), as well as places of mineralogy, mineral springs and thermo.

The “natural” that extends in elevation from M. Roccandagia and, through the High Sella and M. Fiocca, reaches the M. Sumbra – has been identified and is now managed as “Oasis” by the Italian League for Bird Protection. With the aim to promote the conservation wildlife while promoting education through the public use of this center, the OASIS-LIPU has a “visitor center”, “nature trails”, “bird watching points”, etc.. Every year we release here raptors collected and maintained by the Center LIPU Sala Baganza (PR).

Many possibilities for excursions into the reserve at Lake Massaciuccoli: on foot, by boat, canoe and nature trails and teaching of great importance, which are worth a visit with the children.

An extensive network of trails covers the territory of the park, about a hundred are those reported by the Italian Alpine Club, with an additional long-haul routes made by mountain communities, such as the Garfagnana Trekking, the Apuan Alps Trekking, Trekking or the Lunigiana the Alta Via delle Apuane.
Before addressing each path is recommended that you have detailed maps, to verify the practicability of the same and weather conditions.

Below are some of the most classic itineraries you can follow on your own or with the accompaniment of the park guides.

There are many opportunities to make mountain biking along the trails and dirt roads in the park. Very interesting is the possibility offered by the service train + bike FS, all trains of the Lucca-Aulla, and several of the coastal line, ensure, in fact, this service allows us to do routes traversed using the train to go back to the point of departure.
Below we suggest some routes among the most popular and exciting, none of these has a specific marking, so it is advisable to obtain a good map or a detailed guide.

Excluding the mule of the intermediate altitudes The Apuan Alps are not an easy way for horse riding. Require docile horses, well trained and accompanied by expert guides. With these assumptions, a trek on horseback in the Apuan becomes an exciting experience.

The ring of the anarchists