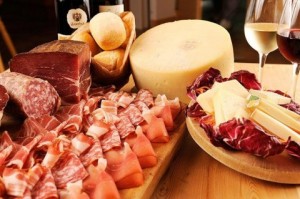 By fish recipes for vegetable pies, by the flavors of the sea in those hills, accompanied by the unmistakable taste of the oils from the local mills: these are the typical flavors of Versilia.

We start with the eels of Viareggio, the EEC, the sparnocchi with beans, until cuttlefish risotto and spinach cooked in Marina di Camaiore.

I hate the man who swallows his food claiming not to know what they are eating. I doubt his taste in more important things.
Charles Lamb, Essays of Elia, 1823
The pleasure of the banquet is to be measured not by the delicacies of the table, but by the company of friends and their speeches.
Marco Tullio Cicerone,
Cato Maior de senectute, 44 a.C.ca.

Versilia is presented as a continuum urbanized along the coast, a line that runs neatly placed between the sea and the Apuan Alps. A close relationship with the sea, created primarily for commercial reasons in the past centuries that saw the Versilia as a large marshy area, with agriculture as the main source of livelihood for the people. The land reclamation made by the end of 1400 allowed a greater usability of the coastline and dissemination of fisheries. A breakthrough that is still found today in the kitchen, mixing the flavors of the sea in those mountains. Just think for example to recipes which spelled with fish or shrimp and squid baked with spelled and seasoned with olive oil and tomato.

We leave from Viareggio, Versilia main fishing harbor which still bears ample evidence of this being rooted among the people and the sea. Worth, first, to take a walk to visit the many fish markets in the morning animate this city. Firstly that the central Piazza Cavour, around which you can find some shops historians as the ancient fish Volpe. Just in Viareggio will taste one of the dishes of the oldest tradition of Versilia: the EEC in the pan, made with garlic, sage, recently reinterpreted by adding some grated lemon zest. Particularly rooted in the tradition of Viareggio, this dish was originally made with the fry of eels (known as just blind) that, at night, were caught as they climbed the river mouth Burlamacca side of Matilde Tower. Today this fishing is prohibited and blind on the market come from breeding. Also in Viareggio, we can not fail to try the sparnocchi with beans recipe that combines the flavors of the countryside to those of the sea, using a type of crustacean similar to the local cicadas.

We now move towards Camaiore, where you can taste the “scarpaccia” very tasty traditional vegetable pie that here, unlike the rest of the province, is made salty. Bringing attention to the preparations of fish, in Marina di Camaiore, missed a taste of risotto with cuttlefish and beets, other preparation that combines the fruits of the sea to those of the earth, or the octopus, that here, in contrast to the in the rest of Tuscany, is prepared without tomato, often with potatoes, recipes made from the typical fragrant oils from local mills. Finally let us recall another specialty Camaiore whose preparation has ancient origins: the “biroldo”, a sausage of pig’s blood flavored.