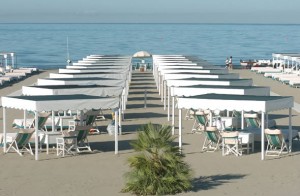 The city is home to one of Italy’s most famous cultural Festival, the Versiliana. In the park where he lived the eccentric poet Gabriele D’Annunzio, in fact, comes to life every summer a rich program of events. In the theater-park successive performances of various kinds. In Coffee Versiliana then take place every afternoon discussions and meetings with well-known personalities from politics, entertainment and current events. On the waterfront overlooking local very famous for celebrity acquaintances: it is Twiga, is currently the most fashionable Versilia, but if you have no knowledge, it is very difficult to enter, and the Shed Seven.

Formerly known throughout Italy, this small town is now famous all over the world. Forte dei Marmi is probably the most chic and luxurious destination to spend their holidays. One feature that has made it attractive especially to Russian clients who today owns villas, palaces and hotel rooms. Despite his fame attracts tourists from all over the world, the small size of the “Fort”, as they call the inhabitants, means that the country does not lose its romantic air. Just take a walk along the pier to realize this. Forte dei Marmi is also the shopping mecca of luxury and Made in Italy. All major Italian designers have a store here, just look up the signs in the windows to read names such as Dolce and Gabbana, Armani, Versace and so on.